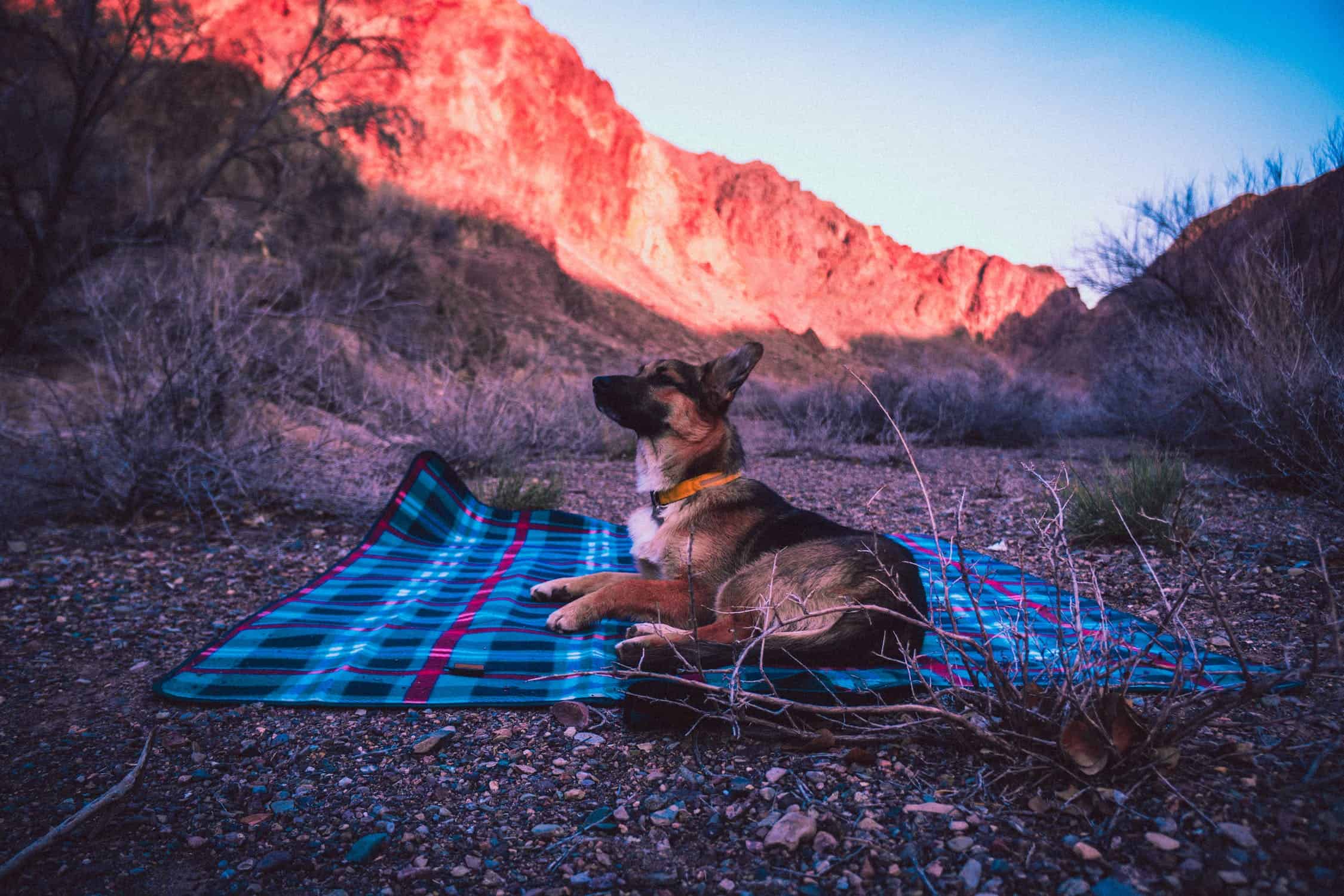 Dogs are our wonderful guides through life, teaching us invaluable lessons on love, relationships, how to live in a moment and what makes a good life lived well.

The doctor came in solemnly, his crossed arms holding a clipboard against his chest.

“I have some bad news,” he began gravely. “Alexa has metastatic cancer that has spread throughout her body. Unfortunately, there is no treatment. She has weeks to months to live.”

The thought of saying goodbye to our dog was unbearable. My husband and I turned to each other and instinctively fell into each other’s arms crying over the fate of our German Shepherd princess. Alexa was a focal point of our lives, an integral part of our daily routine.

Each night she rotated through her repertoire of cuddle postures until we woke up with her in between us, sitting like a sphinx, and waiting for morning pets. As my husband left for work, she would watch his truck pull out of the driveway and then join me in my home office.

Taking her for lunchtime walks was sometimes the only thing keeping me sane on stressful days.

Needless to say, we loved her very much. There was no question that we were going to do everything we could to keep her comfortable and, when the time came, ensure that her final days were peaceful and painless. The wild card was that the masses on her spleen and liver could burst at any time, causing internal bleeding and creating a dire emergency. While my intuition said that would not be Alexa’s fate, we didn’t want to take any chances.

And so for five weeks following the diagnosis, she was never alone again. Since I had more flexibility with my work, it was largely up to me to make sure her remaining time on Earth was everything she wanted it to be.

To that end, I made her a few promises. First, despite my sadness at what was happening, I would stay positive and choose joy over grief. Second, I would put her needs, and even her whims, first. Third, I would do what needed to be done when the time came. Ever of service, it was in fulfilling these promises to her that she offered me her final lessons.

The first promise was hard to keep. It was like the more adorable and happy she was, the sadder I became. In seeing her smiling face as we played tug or chased each other around the couch, my mind kept leaping ahead to how much I was going to miss our play time together and I would start sobbing all over her. Instead of feeling the joy in that current moment, I was pre-occupied with the thought of not having it in the future, which meant I was missing it in the present too.

Yet as we played, Alexa wasn’t thinking about her cancer or worrying about what was going to happen. She was just having fun doing something that she loved. I realized that the best thing I could do for her (and for me) was to immerse myself in the experience with her.

There would be plenty of time to cry over her when she was gone. Now was the time to be happy and celebrate the moments we still had together. By staying in a space of love and gratitude, I felt the joy and connection that made our relationship so special.

The second promise to put her above all else had its challenges too. Fortunately, my work was understanding about the situation and didn’t balk when I canceled a couple of work trips, but I still had deadlines to meet.

Occasionally, when she would stir and want to go for a walk or bring me a toy, I would fall back into a “not now” response. But one afternoon, as I was about an hour away from wrapping up a report, she picked up a rawhide stick that had been laying around and started kicking it around, smiling at me every time she batted or tossed it away. In Alexa’s world, it was play time. I started to say, “I just need to finish this first,” but stopped myself.

“You know what? Do you want to play? Let’s play!” I said out loud, getting on my hands and knees and tossing around the treat.

As I surrendered to the spontaneity of play, I realized that every moment comes with a choice…

We can either spend our time doing things that will bring us joy or things that don’t. Despite how much it sometimes feels like I am subject to the needs and timelines of others, I have the freedom to choose joy in every moment.

Sometimes that might mean finding an aspect of joy in my obligations, but ultimately, we all have a choice. And choosing to spend more time in joy and service to others, to not put it off until this or that is done, means we will live happier lives.
Isn’t that what we all really want?

Most important of all was the third promise of a peaceful and painless passing. According to the doctor, her cancer was not painful, but would eventually interfere with the normal operation of her body. We did not want to let her get to the point where she was uncomfortable or struggling nor have her languish while we battled indecision.

I told myself that I would know when the time was right, but that didn’t stop us from carrying around a lot of anxiety and dread as to when that time would come. We’d both wake up with a start in the middle of the night worried that she wasn’t breathing or a mass had ruptured. Every time we shopped for food for her, it was a question of how much to buy…

As she started eating less and turning down meals that she would have eagerly devoured just a month ago, we wondered if that was a sign that she wasn’t feeling well and it was time to say goodbye. But she still had so much energy and was just as excited to play with her balls and run around the park as she always had been. It just didn’t seem right to say goodbye to a dog still having that much fun. The second-guessing returned.

On Tuesday, she still wasn’t eating much. Wanting to be sure we could put her to rest at home, I made an appointment for home euthanasia that Friday. On Thursday afternoon, following a spirited game of soccer and an interest in hot dogs, I canceled that appointment thinking that if tomorrow is similar to today, it isn’t yet time.

Something inside me hesitated a little, but I wanted to free up the slot to help an animal in greater need. With the appointment canceled, my husband told me that he no longer felt the dread and anxiety that had been consuming him the last couple of weeks. We all took a big breath and relaxed.

Friday morning was pretty normal. We coaxed her into eating a little bit and took her for a walk. My husband left for work. Alexa napped for most of the morning.

When I had finished up a project, I roused her for a walk and her usual enthusiasm wasn’t there. She slowly walked with me down the driveway, but I knew something was wrong. We turned around and went back inside. As a test, I set up a treat game for her. She didn’t want to play. We laid on the rug together as I called the doctor.

My original appointment was taken, but there was an earlier appointment, in about an hour and a half. I booked it and called my husband. It was time.

We spent that last hour cuddled as a pack in our bed stroking her gently and telling her how much we loved her. It was just the right amount of time to say our final goodbyes and allow her to pass in total peace, free of pain or struggle.

Perhaps some unconscious part of me knew on Tuesday that Friday would be the day, but the truth is that I wasn’t sure. I didn’t know and couldn’t plan in advance how it would all play out, but thankfully, when the moment actually did arrive, my knowing was there and the timing was perfect.

As I ponder Alexa’s final gifts, I think about that lesson in trusting my knowing. For months, I have been thinking about making a significant change in my life and endlessly debating when is the right time to make my move. I was looking for signs, like when this happens or I have that available to me.

But what if I release the need to know in advance? What if I accept that I may not be able to plan the perfect moment to leap and trust that, as with Alexa, I will know and be ready when the right moment does come? That way of living, of being in the flow and accepting what comes, is very different from my old way of trying to control everything through sheer force of will.

In trusting more, I let go of the need to see or understand how things are unfolding in order to know that it is happening. I trust that the universe is responding to my intentions and co-creating the alignment that will open the right door at the right time.

Lately, it means trusting that things that may look like mistakes or even tragedies are sometimes even more perfect than our best-laid plans. Sometimes, setbacks are actually shortcuts to a far better future than we had previously imagined.

While we are very sad to have lost our Little Lex, we are grateful for the role she played in creating a new future for us. Her passing now opens up greater possibilities for us, like traveling the world for a while before we move and settle into the new lives we’ve been planning the last year. In the space created by her passing, we can allow new pathways we haven’t yet contemplated taking shape before us.

Finally, those five weeks taught us the value of staying present and experiencing everything in the moment. For the present moment is where joy lives and connection happens. It’s where we are most alive. It took the looming prospect of Alexa’s death to realize that, but that lesson will stay with me as one of her many lasting gifts.

READ NEXT: 6 Amazing Life Lessons From A Very Unusual Teacher