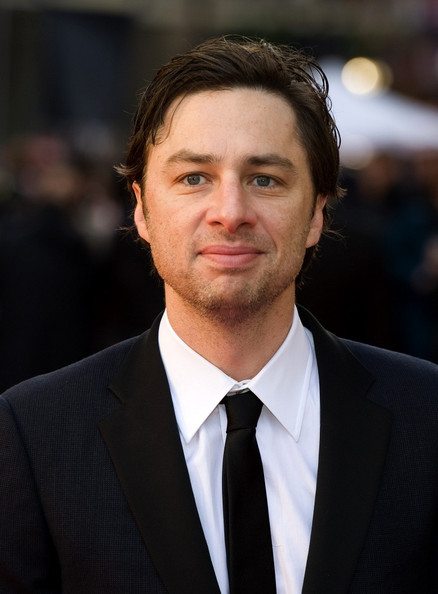 Zach Braff: From Scrubs To All New People 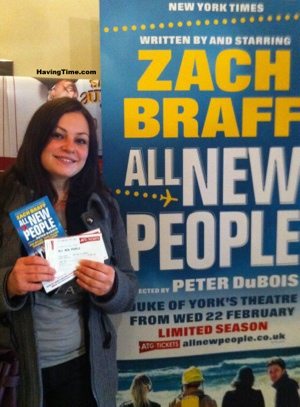 A couple of weeks ago I went to see a play called “All New People” written by and starring Zach Braff at Duke of York Theatre in London’s West End. And I must admit, I never expected myself to like something this much as I was blown away by the script and actors’ play!

I had the first glimpse of Zach Braff about 10 years ago in Scrubs. I had a free day from school. I wasn’t feeling well so I stayed home to recover. What did I do that day?! Not much but I recall myself feeling sick and browsing TV channels like a maniac desperate to find something good. And then I stumbled upon Scrubs for a few seconds. I don’t remember a particular episode, but somehow it helped me a lot. I felt revitalized and good in spite of harsh winter and flu. I never learned the name of that show or that actor (Zach Braff) that made me laugh. I was appreciative. And ever since I was desperate to find out the name of the show and that actor to thank you. 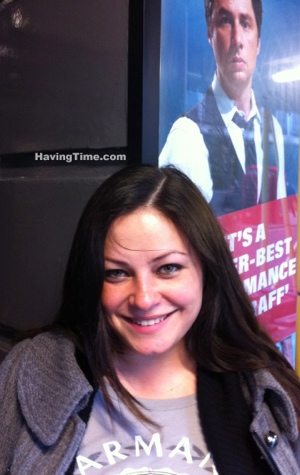 Then years later I moved to London. And yet again it was a day off because I was ill again. Here I was again – flipping through channels and BAM! There it was! Scrubs and Zach Braff! From that moment on we were inseparable. There was something special about that show. The casting stars were amazing – somehow they knew how to take a risk and make complete clowns of themselves and how to be serious and give you a priceless lesson in each episode. I value that a lot. Because personally, I find it hard to find a really good show to watch from the perspective of learning something valuable. Some shows are made for those who just want to come back from work and switch off their brain, and I guess it’s ok too. Where was I? Yes, when Scrubs got it’s final episode of season 8 it got me thinking, where is Zach Braff going next? What amazing thing is he going to do?

And he never failed to surprise me. After a couple of brilliant movies like The Garden State, The Last Kiss and The High Cost Of Living I heard about a new play called “All New People” written by Zach. But it happened to be in New York and I was in London and had no opportunity to go and check it out. Imagine how smitten I was when my better half told me that Zach is coming to London’s West End with his play and that Zach himself will be in the play unlike in New York!! I was busting the ceiling with my head jumping and being happy like crazy! So he got the tickets and we went to the next to last show in London. Why was it special? Because Zach himself said that he didn’t think he would be starring again in All New People. I don’t know if this is what he will decide, but time will tell…

The show itself is amazing. Very powerful, deep and hilarious at the same time! At some points I had this feeling as I was a writer of some lines in the script – that’s how much it was related to me and I bet to most of the audience!
In the beginning of the play I almost failed to hide my excitement to see Zach live for the first time in my life so I squeaked a little while covering my mouth with my palm 🙂 He is a true talent and I’m happy to live in the same era with this wonderful actor.

It was a memorable night and I will never forget the split second when Zach gazed into the front rows where we were sitting and I caught that glimpse and finally whispered “Thank You” to him.
It was a long journey in 10 years. And the thing I want to say that never stop believing in your dreams. Big or small – doesn’t matter. If you want something to happen – it will.

From me to Zach Braff again. Thank you for being you! For bringing all of those pleasant moments of laughter and moments of reality checks when you have to stop and look inside your soul. I hope to see and meet you personally in the future… And I believe I will one day.