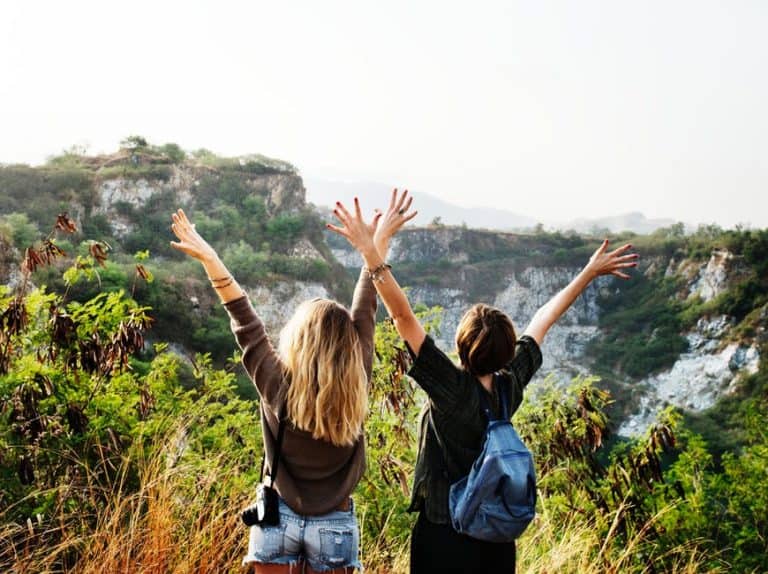 A Simple Way to Change the World… and actually enjoy it 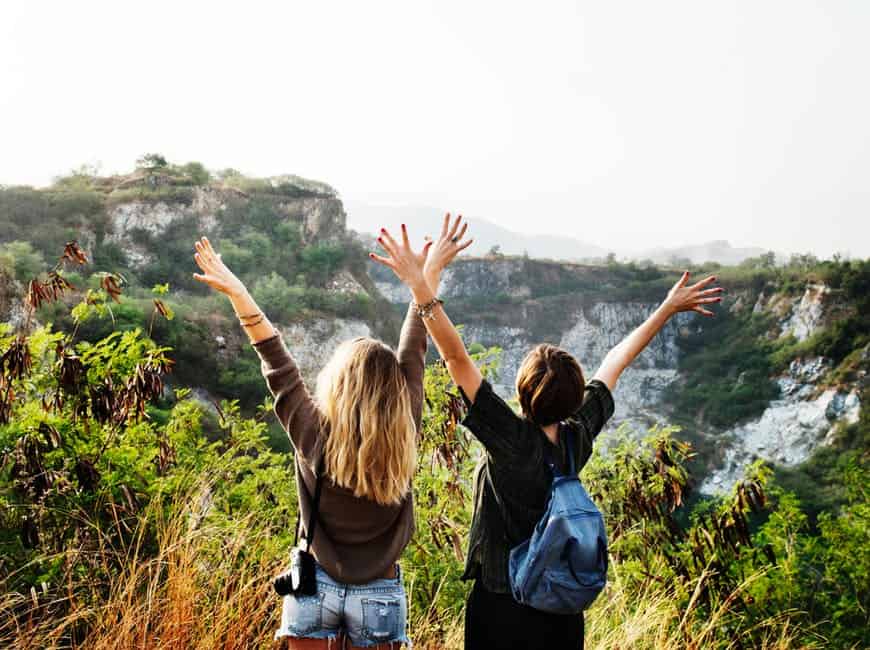 I was shaking as I sat down to put my feet over the edge of the rock cliff. I have a strong fear of heights and that vision of going over and falling to my bone shattering doom is always unsettling.  But I was determined. And scared. But apparently, my determination would win out that day.

I wanted to prove to myself I could do it. I wanted to push myself to the edge and just sit in the fear, let it wash over me, and not move.  It was hard. But I knew I had lived through harder things. And that fear was just a feeling. I wasn’t actually going to fly over the edge. At least I hope not. 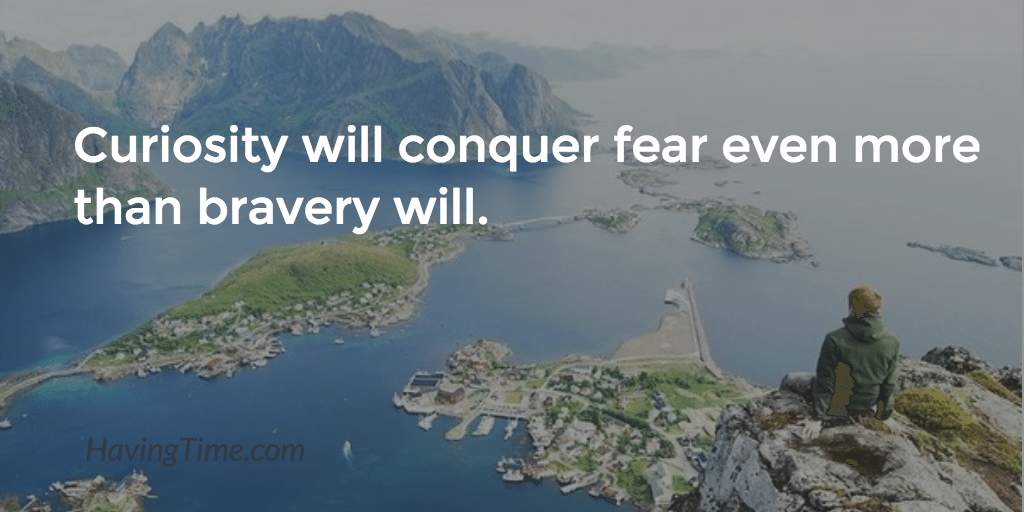 Several weeks prior I had dangled my legs over that same ledge and felt the familiar sense of shaking the fear. Next to me, sat my friend who seemed un-phased by the potential danger…even commenting that his fear of heights didn’t seem to bother him anymore which almost made him sad.  At that point, I felt I could feel it for the both of us. We sat there together, legs moving back and forth. Him looking at ease, me with my heart racing trying to find my calm. I would never have sat there by myself, but with him sitting next to me I felt safer. I felt protected.  He looked fearless as he encouraged me to do what made me fiercely uncomfortable.  I was inspired by his attitude and his strength. Even though I could see he was pretty unimpressed with himself.

A Simple Way to Change the World… and actually enjoy it

When I returned to the ledge on my own, I knew I could do it. I had proof it was possible. I imagined sitting next to my friend and feeling safe…and even though it didn’t take the fear away, it inspired me enough to keep going. I took a picture of my shaking, dangling legs to remind myself I could be strong and brave if I let myself be. I was in the middle of facing many of my fears in life. I had to keep going.

I sent the picture to another friend who was also in the middle of facing and living through many of her own fears as well. She praised me over and over again. She told me the story of a fire tower she climbed once with a friend and was terrified of it. She felt stronger with a friend as well. She wondered if she could climb it alone.

Later in the week, she announced she was going to climb the fire tower solo. She wanted to prove to herself she could. She texted me several times from the bottom of the tower saying she couldn’t do it. She wanted to but she couldn’t find the strength inside herself.  With each elevated step, the panic took over. She was disappointed, but she was glad she made the attempt.

Less than a half an hour later, she sent me a picture of herself at the top of the tower. She looked horrified! But she did it.  She took each uncomfortable step and made it to the top. She was so proud and in love with herself for her accomplishment, she could barely find the words to express it. Pure bliss. Pure pride. Pure love. And pure understanding that we are the only obstacle getting in our own way.

She was overwhelmed with all that she had learned in that experience and it took her a few days to process it all. She wrote about the experience documenting the internal journey that got her there. She was excited to share it. We met that week and talked in person as she once again shared how amazing she felt and scheduled her post to go out the next day.  Still overjoyed she went home on top of the world.

The next morning her scheduled post popped up on Facebook…only hours after it had been discovered that she had died in her sleep. The timing was eerily and sadly perfect.

My friend transitioned from this life on top of the world. She loved herself with complete acceptance of who she was and what she stood for.  She lived as a gift and left with a gift that most work much of their lives hoping to attain.

I returned to the ledge the other day and realized I hadn’t been there in almost two years since she passed. I sat on a rock ledge overlooking the area…not the same one…I didn’t need to prove anything to myself that day. I remembered how inspired I was by my friend’s strength when he sat next to me on the ledge and I remembered the pride my other friend felt when she rediscovered her own. He inspired me, I inspired her, and she inspired herself to be who she already was.  Everything connects. Everyone connects. We are all in this together. 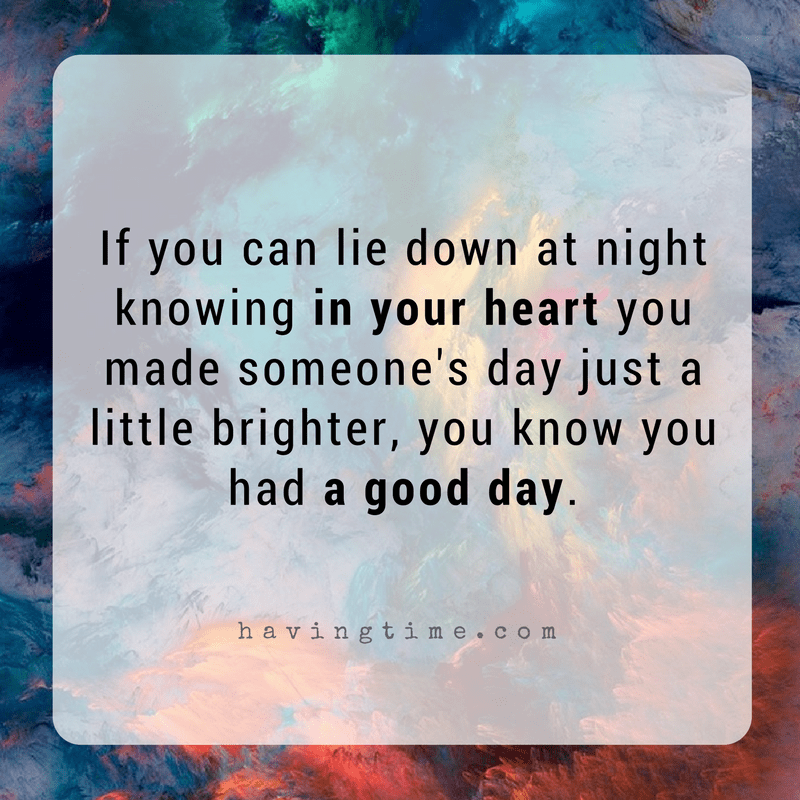 You have no idea how many people you’ve inspired or touched or encouraged just by being yourself.  You don’t know because we don’t share our stories enough. We don’t tell each other how often we appreciate each other and how meaningful we find our connections. We don’t even realize how much we need each other to enjoy this life.

We share our heartache and frustration way more than we do our joy.  And I know for sure we don’t say thank you nearly enough.  For our experiences. For the moments that tap into our strength. For the people that surround us who show us more…and who motivate us to be more.

Most of us live in cultures which support “misery loves company.” We don’t want to feel alone in our fears and our sorrows. But what if we spent more time sharing our successes and our conquered fears? What if we spoke more of our beautiful friendships and relationships, as well as and the moments we meet strangers who make us think twice about our place and our purpose? What would that be like?

I think it would be pretty damn amazing. To practice focusing on the good and the bravery and the pride and the determination that every single one of us possesses. To inspire each other to rise up and be who we are- boldly and beautifully. To change our habitual thoughts of frustration to those of hope and possibility.

We’re never going to stop having the tough moments; we’re not supposed to. But why not share how those tough moments made you grow?  And why not acknowledge and thank the people who got you there, as well as through it? When you uplift yourself, you uplift others and they uplift more and they uplift even more…And that, my friends, is how we change the world!

Are you up for it?